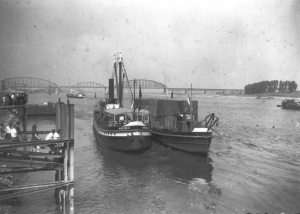 Nijmegen and the surrounding area were severely affected by the war, Nijmegen was in ruins after the American bombing and its location in the front line of continued fighting for months, but the destruction due to war was everywhere  in the wider area. A number of national and international aid campaigns have been initiated in the region. Nijmegen was supported by Haarlem and Zwolle, among others. In 1947, massive American aid came to Nijmegen from Albany, the capital of the State of New York. In Groesbeek, construction workers came from far and wide to build emergency shelters. This exhibition tells a selective part of the relief work for a devastated Nijmegen, Berg en Dal and surroundings, using banners, audiovisual means and objects. More information can be found at www.stichtingfan.nl.

In July 1947 boats arrived at the Waalkade with 300 tons of relief supplies. This first aid shipment brought canned food and clothing packages, including thousands of pairs of shoes, baby clothes, blankets, medicines and bandages, soap, boxes of sanitary towels, typewriters and building materials. The boxes were accompanied by letters from one family to the family in Nijmegen. The shipment provided Nijmegen not only with material relief but also delivered ‘ loads of hope’, it was a signal for the residents to start rebuilding in good spirits.

The exhibition displays the realization of this impressive relief work. It pays attention to the involvement of diplomats, the military, mayors, the press, the Dutch diplomatic connections and what this international cooperation meant for the civilian population. The story is told through old photo material, letters and historical documents, posters, photos and film. The exhibit symbolizes the importance of international cooperation, friendship and solidarity between people of different professional and administrative levels and different cultures.

Where and when?
The projected date of opening the exhibition Reconstruction & International Friendship  in our indoor museum is June, 9th, 2021.   See also the information about the opening times, the rest of the program or the tickets.

The exhibition of FAN Friendship Albany-Nijmegen was realized in collaboration with:

The exhibit was made possible by:

Our office is limetedly open from Monday till Thursday. For further information; 0031-24-3823110 or info@museumparkorientalis.nl.

Welcome to Museumpark Orientalis – Heilig Landstichting! Here the colourful world of Judaism, Christianity and Islam comes to life. Architecture and nature meet in this museum, which stretches out over 30 hectares. Experience different cultures and religions in an educative and playful way in our Jewish and Arabic village, our desert and Karavanserai, and our Roman city street.